I find that my scientific colleagues have a variety of attitudes about what counts as a theory. Some of the differences amount to different standards. Others are simply misconceptions about specific theories. This comes up a lot in discussions of MOND. Before we go there, we need to establish some essentials.

I consider myself to be a very empirically-minded scientist. To me, what is empirical is what the data show.

Hmm. What are data? The results of experiments or observations of the natural world. To give a relevant example, here are some long slit observations of a low surface brightness galaxies (from McGaugh, Rubin, & de Blok 2001).

What you see are spectra obtained with the Kitt Peak 4m telescope. Spectra run from blue to red from left to right while the vertical axis is position along the slit. Vertical bars are emission lines in the night sky. The horizontal grey stuff is the continuum emission from stars in each galaxy (typically very weak in low surface brightness galaxies). You also see blobby dark bars running more or less up and down, but with an S-shaped bend. These are emission lines of hydrogen (the brightest one), nitrogen (on either side of hydrogen) and sulfur [towards the right edge of (a) and (d)].

I chose this example because you can see the rotation curves of these galaxies by eye directly in the raw data. Night sky lines provide an effective wavelength calibration; you can see one side of each galaxy is redshifted by a greater amount than the other: one side is approaching, the other receding relative to the Hubble flow velocity of the center of each galaxy. With little effort, you can also see the flat part of each rotation curve (Vf) and the entire shape V(R)*sin(i) [these are raw data, not corrected for inclination. You can even see a common hazard to real world data in the cosmic ray that struck near then end of the Hα line in (f)].

These rotation curves were measured by Vera Rubin. Vera loved to measure. She liked nothing better than to delve into the data to see what they said. She was very good at it.

Some of these data are good. Some are not. Some galaxies are symmetric (filled and open symbols represent approaching and receding sides), others are not. This is what the real world of galaxy data looks like. With practice, one develops a good intuition for what data are trustworthy and which are not.

To get from the data to these rotation curves, we correct for known effects: the expansion of the universe (which stretches the redshifts by 1+z), the inclination of each galaxy (estimated in this case by the axis ratios of the images), and most importantly, assuming the Doppler effect holds. That is, we make use of the well known relation between wavelength and speed to turn the measured wavelengths of the Hα and other emission lines into velocities. We use the distance to each galaxy (estimated from the Hubble Law) to convert measured position along the slit into physical radius.

This is empirical. Empirical results are as close to the data as possible. Here we make use of two other empirical results, the Doppler effect and the Hubble Law. So there is more to it than just the raw (or even processed) data; we are also making use of previously established facts.

An example of a new empirical fact obtained from data like these is the Baryonic Tully-Fisher relation. This is a plot of the observed baryonic mass in a galaxy (the sum of stars and gas) against the amplitude of flat rotation (Vf). 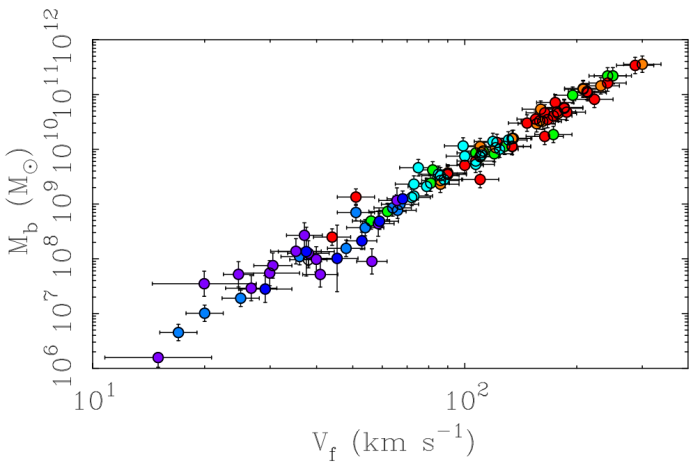 Here one must utilize some other information to estimate the mass-to-light ratio of the stars. This is an additional step; how we go about it affects the details of the result but not the basic empirical fact that the relation exists.

It is important distinguish between the empirical relation as plotted above, and a function that might be fit to it. The above data are well fit by the formula

with mass measured in solar masses and rotation speed in kilometers per second. The fit is merely a convenient representation of the data. The data themselves are the empirical result.

In this case, the scatter in the data is consistent with what you’d expect for the size of the error bars. The observed relation is consistent with one that has zero intrinsic scatter – a true line. The reason for that might be that it is imposed by some underlying theory (e.g., MOND). Whether MOND is the reason for the Baryonic Tully-Fisher relation is something that can be debated. That the relation exists as an empirical result that must be explained by any theory that attempts to explain the mass discrepancy problem in galaxies cannot.

I would hope it is obvious that theory should explain data. In the context of the mass discrepancy problem, the Baryonic Tully-Fisher relation is one fact that needs to be explained. There are many others. Which interpretation we are driven towards depends a great deal on how we weigh the facts. How important is this particular fact in the context of all others?

I find that many scientists confuse the empirical Baryonic Tully-Fisher relation with the theory MOND. Yes, MOND predicts a Baryonic Tully-Fisher relation, but they are not the same thing. The one we observe is consistent with MOND. It need not be (and is not for some implausible but justifiable assumptions about the stellar mass-to-light ratio). The mistake I see many people make – often reputable, intelligent scientists – is to conflate data with theory. A common line of reasoning seems to be “These data support MOND. But we know MOND is wrong for other reasons. Therefore these data are wrong.” This is a logical fallacy.

More generally, it is OK to incorporate well established results (like the Doppler effect) into new empirical results so long as we are careful to keep track of the entire line of reasoning and are willing to re-examine all the assumptions. In the example of the Baryonic Tully-Fisher relation, the critical assumption is the mass-to-light ratio of the stars. That has minor effects: mostly it just tweaks the slope of the line you fit to the data.

If instead we have reason to doubt the applicability of something deeper, like the applicability of the Doppler formula to galaxies, that would open a giant can of worms: a lot more than the Tully-Fisher relation would be wrong. For this reason, scientists are usually very impatient with challenges to well established results (who hasn’t received email asserting “Einstein was wrong!”?) To many, MOND seems to be in this category.

Consequently, many scientists are quick to dismiss MOND without serious thought. I did, initially. But eventually it had enough predictions come true that I felt compelled to check. (Bekenstein pointed out a long time ago that MOND has had many more predictions come true than General Relativity had had at the time of its widespread acceptance.) When I checked, I found that the incorrect assumption I had made was that MOND could so lightly be dismissed. In my experience since then, most of the people arguing against MOND haven’t bothered to check their facts (surely it can’t be true!), or have chosen to selectively weigh most those that agree with their preconception of what the result should be. If the first thing someone mentions in this context is the Bullet cluster, they are probably guilty of both these things, as this has become the go-to excuse not to have to think too hard about the subject. Cognitive dissonance is rife.

tritonstation Stacy McGaugh is an astrophysicist and cosmologist who studies galaxies, dark matter, and theories of modified gravity. He is an expert on low surface brightness galaxies, a class of objects in which the stars are spread thin compared to bright galaxies like our own Milky Way. He demonstrated that these dim galaxies appear to be dark matter dominated, providing unique tests of theories of galaxy formation and modified gravity. Professor McGaugh is currently the chair of the Department of Astronomy at Case Western Reserve University in Cleveland, Ohio, and director of the Warner and Swasey Observatory. Previously he was a member of the faculty at the University of Maryland, having also held research fellowships at Rutgers, the Department of Terrestrial Magnetism of the Carnegie Institution of Washington, and the Institute of Astronomy at the University of Cambridge after earning his Ph.D. from the University of Michigan.
Published June 25, 2016

9 thoughts on “What is empirical?”