OK, I’m not even going to try to answer that one. But I am going to do some comparison exploration.

A complaint often leveled against MOND is that it is not a theory. Or not a complete theory. Or somehow not a proper one. Sometimes people confuse MOND with the empirical observations that display MONDian phenomenology.

I would say that MOND is a hypothesis, as is dark matter. We observe a discrepancy between the motions observed in extragalactic systems and what is predicted by application of the known law of gravity to the mass visible in ordinary baryonic matter. Either we need more mass (dark matter) or need to change the force law (modify dynamical laws, i.e., gravity). MOND is just one example of the latter type of hypothesis.

Put this way, dark matter is the more conservative hypothesis. It doesn’t require any change to well established, fundamental theory. There’s just more mass there than we see.

But what is it? Dark matter as so far stated is not a valid scientific hypothesis. It is a concept – there is unseen stuff out there. To turn it into science, we need to hypothesize a specific candidate.

An example of a dark matter candidate that most people would agree has been falsified at this point is brown dwarfs. These are very faint, sub-stellar objects – failed stars if you like, things not quite massive enough to ignite nuclear fusion in their cores to shine as stars. In the early days of dark matter, it was quite reasonable to believe there could be an enormous amount of mass in the sum of these objects. Indeed, the mass spectrum of stars as then known (via the Salpeter IMF) diverged when extrapolated to the low masses of brown dwarfs. It appeared that there had to be lots of them, and their integrated mass could easily add up to lots and lots – potentially enough to be the dark matter.

The hypothesis of brown dwarf-like dark matter, dubbed MACHOs (MAssive Compact Halo Objects), was tested by a series of microlensing experiments. Remarkably, if you stare at the stars in the Large Magellanic Cloud long enough, you should occasionally witness a MACHO pass in front of one of them. You don’t see the MACHO directly, but you can see an enhancement to the brightness of the background star due to the gravitational lensing effect of the MACHO.

Long story short: microlensing events are observed, but not nearly enough are seen for the dark matter halo of the Milky Way to be composed of brown dwarf MACHOs. Nowadays we have a better handle on the stellar mass spectrum. Lots of brown dwarfs are indeed known, but nothing like the numbers necessary to compose the dark matter.

Many of us, including me, never gave MACHOs much of a chance. In order to add up to the total mass density we need in dark matter cosmologically, we need an amount 5 or 6 times as great as the density allowed in baryons by Big Bang Nucleosynthesis. So MACHO dark matter would break some pretty fundamental theory after all.

The most popular hypothesis, then and now, is some form of non-baryonic dark matter. Most prominent among these are WIMPs (Weakly Interacting Massive Particles). This is a valid, specific hypothesis that can be tested in the laboratory. Indeed, it has been. If the WIMP hypothesis were correct, we really should have detected them by now. It only persists because it is very flexible: we can keep adjusting the interaction cross-section to keep them invisible.

Like WIMPs, supersymmetry can be made more complicated to avoid falsification. This allows it to persist, but it is not the sign of a healthy theory. Still, everybody seems to agree that it is a theory, and most people seem to think it is a good one.

Unlike MACHOs, WIMPs do require a fundamentally new theory. Supersymmetry is not a part of the highly successful Standard Model of particle physics. It is a hypothetical extension thereof. So they aren’t really as conservative as just saying there is some unseen mass. There have to be invisible particles that reside in an entirely novel and itself hypothetical dark sector. That they have never been detected in the laboratory, and so far we have zero laboratory evidence to support the existence of the supersymmetric sector in which they reside, despite enormous (and expensive) effort (e.g., the LHC), might strike some as cause for concern.

So why do WIMPs persist? Time lag and training. If you are an astronomer, you don’t really care what the dark matter particle is, just that it is there. You are unlikely to keep close tabs on the tribulations of dark matter detection experiments. If you are an astroparticle physicist, dark matter particles are your bread and butter. We all know the Standard Model is incomplete; surely the dark matter problem is just a sign of that. Suggesting that the problem might instead be with gravity is to admit that the entire field is an oxymoron. Yes, we need new physics. But that would be the wrong kind of new physics! 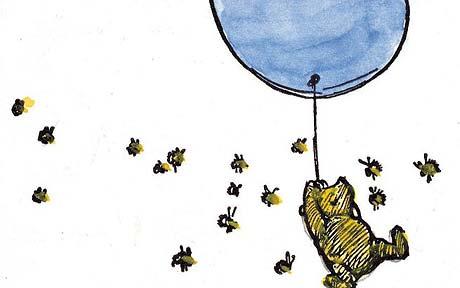 The MOND hypothesis is an example of the wrong kind of new physics. No new particles; rather, new dynamics. The idea is to tweak the force law below a critical acceleration scale (of order 1 Å/s/s). Intriguingly, this can be interpreted as either a modification of gravity (which gets stronger) or of inertia (which gets less, so particles become easier to push around).

From such a hypothesis, one must construct a proper theory – whatever that is. One thing is for sure – the motivation is the opposite of supersymmetry. Supersymmetry is motivated by theory. It is a Good Idea that therefore ought to be true, even if it appears that Nature declined to implement it. MOND has no compelling theoretical motivation or basis. (Who ordered that?) Rather, it is empirically motivated. It started by seeking a possible explanation for a particular observation: the apparent flatness of spiral galaxy rotation curves. In this regard, it could be considered an effective theory, though it does have strong implications for what the underlying cause is.

The original (1983) MOND formula did not conserve energy or momentum. That’s not a property of a healthy theory. Some people seem to think it is still stuck there.

The first step towards building a proper theory was taken by Bekenstein and Milgrom in 1984 with AQUAL. They introduced an aquadratic Lagrangian that led to a modified Poisson equation, a form of modified gravity. Being derived form a Lagrangian, it automatically satisfies the conservation laws.

Since then, a variety of MOND theories have been posited. By this, I mean distinct theories that lead to the hypothesized behavior at low acceleration. These may be modifications of either gravity or inertia, and can lead to subtly different higher order predictions. 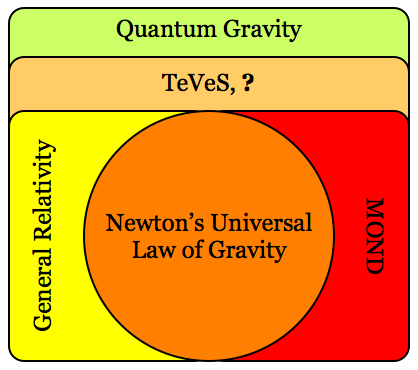 Of course I agree that we want to have it all. I also think it is appropriate to take one step at a time. If Newtonian dynamics is in itself a valid theory – and I think it is – then so too is MOND, as it contains all of Newton in the appropriate limit. MOND is an incomplete theory, but it is certainly a theory.

For many years, an argument against MOND was that Bekenstein had sought the Holy Grail long and hard without success. Bekenstein was really smart, implying that if he couldn’t do it, it couldn’t be done.  In 2004, Bekenstein published TeVeS (for Tensor-Vector-Scalar), the first example of a theory that contained both General Relativity and MOND without obviously having some dreadful failing, like ghosts. The argument then became that TeVeS was inelegant.

It is not clear that TeVeS is the correct generalized version of General Relativity. Indeed, it is not the only such theory possible. Hence the question mark in the Venn diagram. If we falsify TeVeS, it doesn’t falsify the MOND hypothesis – that would be like saying Newton is wrong because Yilmaz gravity isn’t the right version of general relativity. There are many such theories that are possible; TeVeS is just one particular realization thereof.

What theory the question mark in the Venn diagram represents is what we should be trying to figure out. Unfortunately, most scientists interested in the subject are not trained nor equipped to do this sort of work, and for the most part are conditioned to be actively hostile to the project. That’s the wrong kind of new physics!

I find this a strange attitude. We all know that, as yet, there is no widely accepted theory of quantum theory. In this regard, General Relativity is itself incomplete. It is a noble endeavor to seek a quantum theory of gravity. How can we be sure that there is no intermediate step? Perhaps some of the difficulty in getting there stems from playing with an incomplete deck. I sometimes wonder if some string theorist has already come up with the correct theory but discarded it because it predicted this crazy low acceleration behavior he didn’t know might actually be desirable.

Whatever the final theory may be, be it dark matter based or a modification of dynamics, it must explain the empirical phenomena we observe. An enormous amount of galaxy phenomenology can be put down to one simple fact: galaxies behave as if MOND is the effective force law. We can write down a single formula that describes the dynamics of hundreds of measured galaxies and has had tremendous predictive success. If you don’t find that compelling, your physical intuition needs a check up.

tritonstation Stacy McGaugh is an astrophysicist and cosmologist who studies galaxies, dark matter, and theories of modified gravity. He is an expert on low surface brightness galaxies, a class of objects in which the stars are spread thin compared to bright galaxies like our own Milky Way. He demonstrated that these dim galaxies appear to be dark matter dominated, providing unique tests of theories of galaxy formation and modified gravity. Professor McGaugh is currently the chair of the Department of Astronomy at Case Western Reserve University in Cleveland, Ohio, and director of the Warner and Swasey Observatory. Previously he was a member of the faculty at the University of Maryland, having also held research fellowships at Rutgers, the Department of Terrestrial Magnetism of the Carnegie Institution of Washington, and the Institute of Astronomy at the University of Cambridge after earning his Ph.D. from the University of Michigan.
Published June 27, 2016August 24, 2022

6 thoughts on “What is theory?”