The missing mass problem has been with us many decades now. Going on a century if you start counting from the work of Oort and Zwicky in the 1930s. Not quite a half a century if we date it from the 1970s when most of the relevant scientific community started to take it seriously. Either way, that’s a very long time for a major problem to go unsolved in physics. The quantum revolution that overturned our classical view of physics was lightning fast in comparison – see the discussion of Bohr’s theory in the foundation of quantum mechanics in David Merritt’s new book.

To this day, despite tremendous efforts, we have yet to obtain a confirmed laboratory detection of a viable dark matter particle – or even a hint of persuasive evidence for the physics beyond the Standard Model of Particle Physics (e.g., supersymmetry) that would be required to enable the existence of such particles. We cannot credibly claim (as many of my colleagues insist they can) to know that such invisible mass exists. All we really know is that there is a discrepancy between what we see and what we get: the universe and the galaxies within it cannot be explained by General Relativity and the known stable of Standard Model particles.

If we assume that General Relativity is both correct and sufficient to explain the universe, which seems like a very excellent assumption, then we are indeed obliged to invoke non-baryonic dark matter. The amount of astronomical evidence that points in this direction is overwhelming. That is how we got to where we are today: once we make the obvious, imminently well-motivated assumption, then we are forced along a path in which we become convinced of the reality of the dark matter, not merely as a hypothetical convenience to cosmological calculations, but as an essential part of physical reality.

I think that the assumption that General Relativity is correct is indeed an excellent one. It has repeatedly passed many experimental and observational tests too numerous to elaborate here. However, I have come to doubt the assumption that it suffices to explain the universe. The only data that test it on scales where the missing mass problem arises is the data from which we infer the existence of dark matter. Which we do by assuming that General Relativity holds. The opportunity for circular reasoning is apparent – and frequently indulged.

It should not come as a shock that General Relativity might not be completely sufficient as a theory in all circumstances. This is exactly the motivation for and the working presumption of quantum theories of gravity. That nothing to do with cosmology will be affected along the road to quantum gravity is just another assumption.

I expect that some of my colleagues will struggle to wrap their heads around what I just wrote. I sure did. It was the hardest thing I ever did in science to accept that I might be wrong to be so sure it had to be dark matter – because I was sure it was. As sure of it as any of the folks who remain sure of it now. So imagine my shock when we obtained data that made no sense in terms of dark matter, but had been predicted in advance by a completely different theory, MOND.

When comparing dark matter and MOND, one must weigh all evidence in the balance. Much of the evidence is gratuitously ambiguous, so the conclusion to which one comes depends on how one weighs the more definitive lines of evidence. Some of this points very clearly to MOND, while other evidence prefers non-baryonic dark matter. One of the most important lines of evidence in favor of dark matter is the acoustic power spectrum of the cosmic microwave background (CMB) – the pattern of minute temperature fluctuations in the relic radiation field imprinted on the sky a few hundred thousand years after the Big Bang.

The equations that govern the acoustic power spectrum require General Relativity, but thankfully the small amplitude of the temperature variations permits them to be solved in the limit of linear perturbation theory. So posed, they can be written as a damped and driven oscillator. The power spectrum favors features corresponding to standing waves at the epoch of recombination when the universe transitioned rather abruptly from an opaque plasma to a transparent neutral gas. The edge of a cloud provides an analog: light inside the cloud scatters off the water molecules and doesn’t get very far: the cloud is opaque. Any light that makes it to the edge of the cloud meets no further resistance, and is free to travel to our eyes – which is how we perceive the edge of the cloud. The CMB is the expansion-redshifted edge of the plasma cloud of the early universe.

An easy way to think about a damped and a driven oscillator is a kid being pushed on a swing. The parent pushing the child is a driver of the oscillation. Any resistance – like the child dragging his feet – damps the oscillation. Normal matter (baryons) damps the oscillations – it acts as a net drag force on the photon fluid whose oscillations we observe. If there is nothing going on but General Relativity plus normal baryons, we should see a purely damped pattern of oscillations in which each peak is smaller than the one before it, as seen in the solid line here:

As one can see, the case of no Cold Dark Matter (CDM) does well to explain the amplitudes of the first two peaks. Indeed, it was the only hypothesis to successfully predict this aspect of the data in advance of its observation. The small amplitude of the second peak came as a great surprise from the perspective of LCDM. However, without CDM, there is only baryonic damping. Each peak should have a progressively lower amplitude. This is not observed. Instead, the third peak is almost the same amplitude as the second, and clearly higher than expected in the pure damping scenario of no-CDM.

CDM provides a net driving force in the oscillation equations. It acts like the parent pushing the kid. Even though the kid drags his feet, the parent keeps pushing, and the amplitude of the oscillation is maintained. For the third peak at any rate. The baryons are an intransigent child and keep dragging their feet; eventually they win and the power spectrum damps away on progressively finer angular scales (large 𝓁 in the plot).

As I wrote in this review, the excess amplitude of the third peak over the no-CDM prediction is the best evidence to my mind in favor of the existence of non-baryonic CDM. Indeed, this observation is routinely cited by many cosmologists to absolutely require dark matter. It is argued that the observed power spectrum is impossible without it. The corollary is that any problem the dark matter picture encounters is a mere puzzle. It cannot be an anomaly because the CMB tells us that CDM has to exist.

Impossible is a high standard. I hope the reader can see the flaw in this line of reasoning. It is the same as above. In order to compute the oscillation power spectrum, we have assumed General Relativity. While not replacing it, the persistent predictive successes of a theory like MOND implies the existence of a more general theory. We do not know that such a theory cannot explain the CMB until we develop said theory and work out its predictions.

That said, it is a tall order. One needs a theory that provides a significant driving term without a large amount of excess invisible mass. Something has to push the swing in a universe full of stuff that only drags its feet. That does seem nigh on impossible. Or so I thought until I heard a talk by Pedro Ferreira where he showed how the scalar field in TeVeS – the relativistic MONDian theory proposed by Bekenstein – might play the same role as CDM. However, he and his collaborators soon showed that the desired effect was indeed impossible, at least in TeVeS: one could not simultaneously fit the third peak and the data preceding the first. This was nevertheless an important theoretical development, as it showed how it was possible, at least in principle, to affect the peak ratios without massive amounts of non-baryonic CDM.

At this juncture, there are two options. One is to seek a theory that might work, and develop it to the point where it can be tested. This is a lot of hard work that is bound to lead one down many blind alleys without promise of ultimate success. The much easier option is to assume that it cannot be done. This is the option adopted by most cosmologists, who have spent the last 15 years arguing that the CMB power spectrum requires the existence of CDM. Some even seem to consider it to be a detection thereof, in which case we might wonder why we bother with all those expensive underground experiments to detect the stuff.

Rather fewer people have invested in the approach that requires hard work. There are a few brave souls who have tried it; these include Constantinos Skordis and Tom Złosnik. Very recently, the have shown a version of a relativistic MOND theory (which they call RelMOND) that does fit the CMB power spectrum. Here is the plot from their paper: 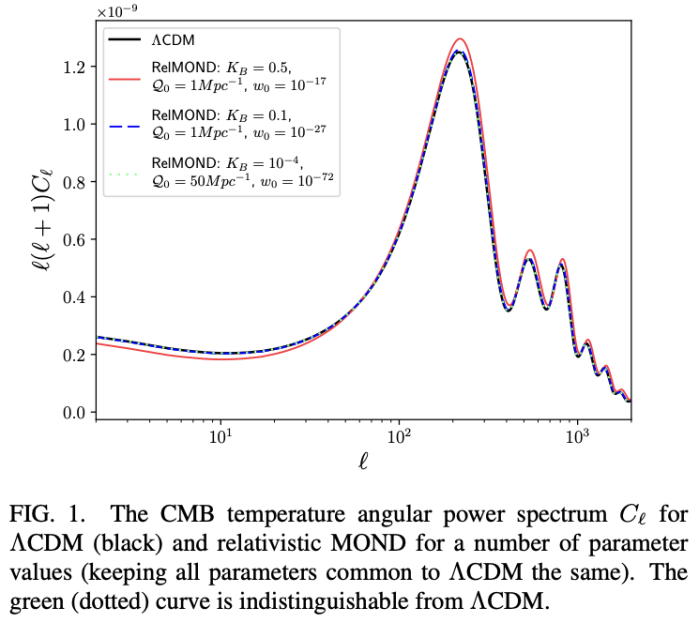 Note that black line in their plot is the fit of the LCDM model to the Planck power spectrum data. Their theory does the same thing, so it necessarily fits the data as well. Indeed, a good fit appears to follow for a range of parameters. This is important, because it implies that little or no fine-tuning is needed: this is just what happens. That is arguably better than the case for LCDM, in which the fit is very fine-tuned. Indeed, that was a large point of making the measurement, as it requires a very specific set of parameters in order to work. It also leads to tensions with independent measurements of the Hubble constant, the baryon density, and the amplitude of the matter power spectrum at low redshift.

As with any good science result, this one raises a host of questions. It will take time to explore these. But this in itself is a momentous result. Irrespective if RelMOND is the right theory or, like TeVeS, just a step on a longer path, it shows that the impossible is in fact possible. The argument that I have heard repeated by cosmologists ad nauseam like a rosary prayer, that dark matter is the only conceivable way to explain the CMB power spectrum, is simply WRONG.

tritonstation Stacy McGaugh is an astrophysicist and cosmologist who studies galaxies, dark matter, and theories of modified gravity. He is an expert on low surface brightness galaxies, a class of objects in which the stars are spread thin compared to bright galaxies like our own Milky Way. He demonstrated that these dim galaxies appear to be dark matter dominated, providing unique tests of theories of galaxy formation and modified gravity. Professor McGaugh is currently the chair of the Department of Astronomy at Case Western Reserve University in Cleveland, Ohio, and director of the Warner and Swasey Observatory. Previously he was a member of the faculty at the University of Maryland, having also held research fellowships at Rutgers, the Department of Terrestrial Magnetism of the Carnegie Institution of Washington, and the Institute of Astronomy at the University of Cambridge after earning his Ph.D. from the University of Michigan.
Published July 13, 2020July 16, 2020

58 thoughts on “A Significant Theoretical Advance”